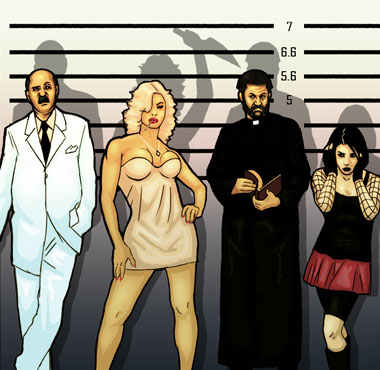 Once Upon a Crime is a free location based who-did-it mystery game for the mobile phone, made freely available to the public - downloadable through the Apple App Store and Google Play. The application was created as a gaming platform which promotes localized retail shops, restaurants, museums, and other entertainment centers by encouraging the player to visit these locations as a core function of completing the game.

In-game, our players are presented with a list of unique suspects, weapons, and crime scenes. While our suspects and weapons are fictional, the crime scenes presented in game are real world locations within the games defined market. The player must travel to these locations, and make an accusation against a suspect and declare the weapon that was used in the crime. The player is only allowed to make one accusation per location per day.

If the player guesses wrong, a suspect, weapon, or location is eliminated for them automatically. For example, they may be told that "Detective - forensics just tested the Ax and ruled it out.", or “Sorry Detective, it turns our Mrs. Smith has a solid alibi”. These eliminated suspects, weapons, and locations are tracked in-game, and allows the player to determine the true criminals identity through a process of elimination.

The first player to guess the correct combination of suspect, victim, weapon, and location wins the game.

driving potential customers to your business through game play.

Once Upon a Crime was created as a free gaming platform which promotes localized retail shops, restaurants, museums, and other entertainment centers by encouraging the player to visit these locations as a core function of completing the game.

Players of the game are further insensitivity to participate by offering in-game discounts, badges and recognition, and in some cases a vendor supplied reward upon successful completion of the game.

Players are incentivize to participate in free gameplay through ranks, promotions, and redeamble points.

As part of the gameplay, players must visit areas designated as crime scenes in the game.

Businesses can give in-game offerings and coupons when a player checks in. 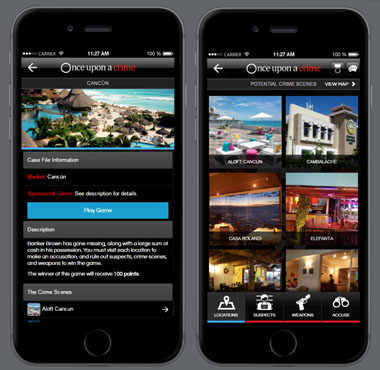